Sofonisba Anguissola and A Room of One's Own

“I thought of the organ booming in the chapel, and the shut doors in the library, and I thought how unpleasant it is to be locked out— how it is worse perhaps to be locked in” –Virginia Woolf

Was considered one of the most influential painters during the Renaissance and into the Baroque periods all the way into her old age-- living and still painting into the incredible age of 92 (almost unheard of back then).

Mentioned in Vasari's Lives of the greatest artists and painters (use quote from him?)

Anguissola used herself as frequent subject matter for her paintings long before self-portraiture was really considered and valued at all in the world of painting. She painted herself at least 12 times (nine of which are shown below).

"…all the literary training that a woman had in the early nineteenth century was training in the observation of character, in the analysis of emotion. Her sensibility had been educated for centuries by the influences of the common sitting-room. People’s feelings were impressed on her; personal relations were always before her eyes. Therefore, when the middle-class woman took to writing, she naturally wrote novels…" (Virginia Woolf) 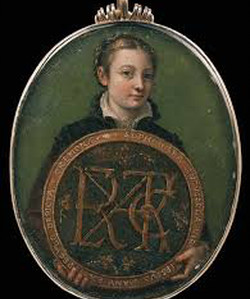 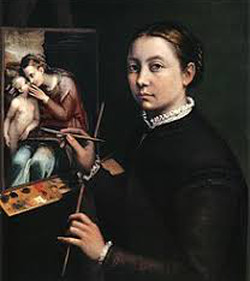 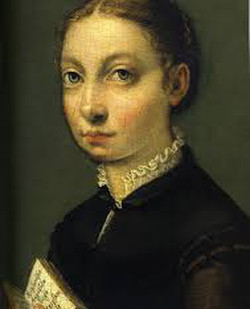 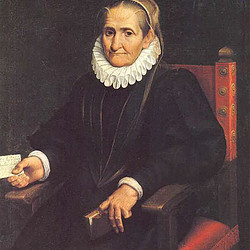 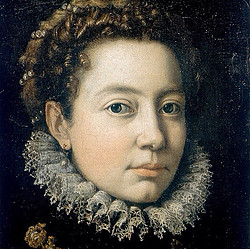 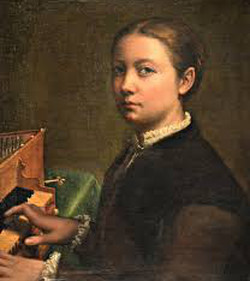 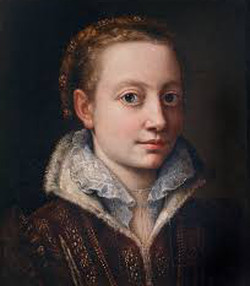 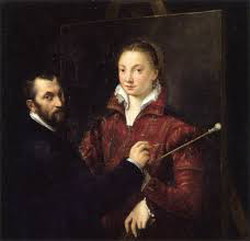 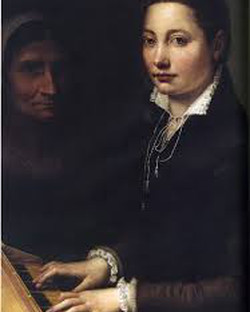 • She always represents herself in action as an artist- always in the midst of creation, rarely just idly posing for the viewer

• She is poised, a virtuous society woman of course, but she treats her vocation with the utmost significance - this is her calling

• Women were not allowed access to drawing classes where they could observe from the live nude model, herself or her family members were the most accessible recourse for drawing from life

“And, as Miss Nightingale was so vehemently to complain—”women never have an half hour . . . that they can call their own”— she was always interrupted. Still it would be easier to write prose and fiction there than to write poetry or a play. Less concentration is required. Jane Austen wrote like that to the end of her days. ‘How she was able to effect all this’, her nephew writes in his Memoir, ‘is surprising, for she had no separate study to repair to, and most of the work must have been done in the general sitting-room, subject to all kinds of casual interruptions. She was careful that her occupation should not be suspected by servants or visitors or any persons beyond her own family party.8 Jane Austen hid her manuscripts or covered them with a piece of blotting-paper. Then, again, all the literary training that a woman had in the early nineteenth century was training in the observation of character, in the analysis of emotion. Her sensibility had been educated for centuries by the influences of the common sitting-room. People’s feelings were impressed on her; personal relations were always before her eyes. Therefore, when the middle-class Woman took to writing, she naturally wrote novels, even though, as seems evident enough, two of the four famous women here named were not by nature novelists….And, I wondered, would Pride and Prejudice have been a better novel if Jane Austen had not thought it necessary to hide her manuscript from visitors?

• Anguissola's portraits display a special interest in physiognomy (PHYSIOGNOMY: a person’s facial features or expression, especially when regarded as indicative of character or ethnic origin)

• above all, what emerges in an awareness of self... “Sofinisba is there with her seriousness but also with the conviction of being a mature painter, and her wide open eyes now have the depth and intensity of a settled inner life.”

Sofonisba Anguissola, Portrait of a Nun, 1551

• "According to an account provided by Federico Saachi, this portrait had an inscription with the date and signature of the artist, which as noted for the first time during a visit to the “Permanent Exposition of antique paintings which takes place under the presidency of Lord Ellesmere in the halls of the Brittannica Institution” where the canvas was attributed to Titian" (Collier Frick) -- it was not until the 19th century that Portrait of a Nun was realized to be an Aguissola painting (about 300 years later)

• This is a portrait painted by Sofonisba of herself being painted by Bernardino Campi who was her teacher in painting and drawing from a young age.

• He is shown painting a portrait of her, and she is shown wearing decadent fabrics with gold detailing, and aristocratically holding a pair of gloves in her left hand

• her figure is front and center, dominating the scene with the light bouncing off of her skin- her figure placed higher up in the composition than he is

• illustrates the complex relationship between the pupil and the teacher 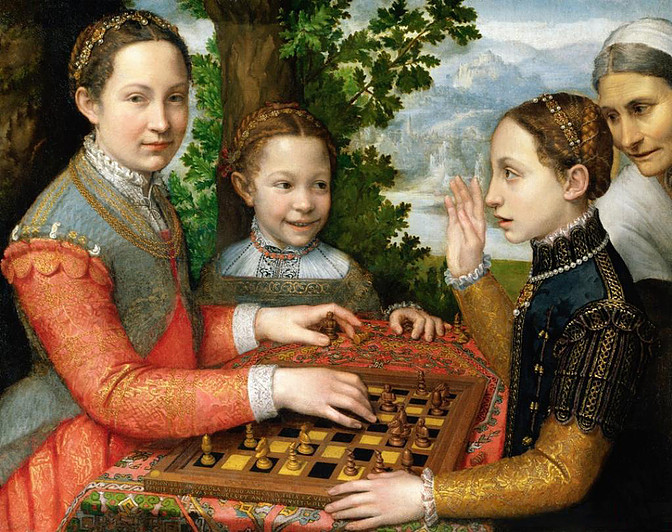 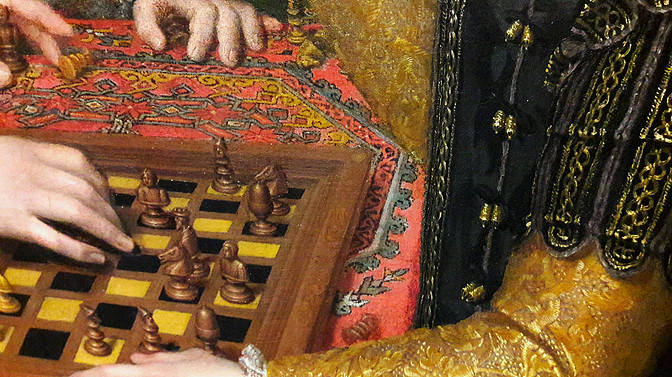 • one of the most girl power paintings EVER

• games often involved making bets, an since women were hardly allowed to own anything, they had nothing to place bets on without their husbands

• during the late 16th century, there were recent changes in the rules and components of chess- usually the kings and bishops had the most power in the game, but now the Queen was given the ultimate power... and educated women in Italian society were now allowed to play

• Lucia, the sister on the left makes the winning move with the Queen, looking at us as if to say that she KNOWS she holds the power- the sister on the right raises her hand in defeat- youngest sister in the middle smiles and understands what has taken place despite her young age

Woolf, Virginia. A Room of One's Own. Virginia Woolf. Published by L. and V. Woolf at the Hogarth Press, 1931.